A SCREAM FOR LOVE AND ACCEPTANCE

Yaelle, a new immigrant in Israel from France, met Aya, an israeli musician, that became her first female partner. She flew to Paris to tell her parents she was in love with a woman and since then her dad stopped talking to her.
Aya and Yaelle have been almost 2 years together and Aya wants them to get married.
Since Yaelle doesn’t see the point to get married without her parents being present at the wedding, Aya pushes her to reconnect with her parents and take the opportunity that they are coming to Israel for the circumcision of their first grand children from their orthodox son to break these years of silence.

Yaelle wants to go to the religious event with her partner and that the family will know about her relationship with Aya. Since she got rejected, she accepts to come out in the newspaper. She had enough of hiding herself.

The young and naive couple still don’t give up. They fly to Paris to confront against Yaelle’s parents attempting to be accepted by the French family....

The movie is a moving, musical and poetic journey. It takes you to the outside and the inside world of Yaelle and Aya. The camera captures intimate moments between these two young women as they document their life in Jaffa, Israel and the Cornelian dilemma that Yaelle has to deal with.

This documentary takes you between despair and hope, showing courage and honesty alongside the price of freedom. 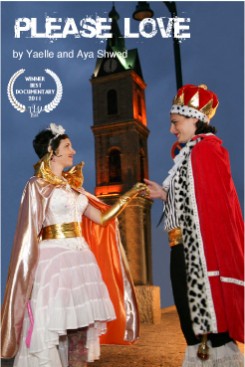